How religiously free is the Arab world’s most democratic country?

Western leaders hailed Tunisia’s Jasmine revolution in 2011 as an inspiration for democracy in the Arab world.

Today, Tunisia remains the only Arab country whose revolution was at least partly successful, with Libya, Egypt and Syria descending into sectarianism, dictatorship and civil war. Tunisians achieved the right to hold fair and free elections, speak their mind and practice their faith freely.

Or so they thought.

Religious tensions and political rhetoric continue to simmer below the surface as the country has become increasingly susceptible to conservative Islamism. Five Tunisians were arrested last month for not respecting Ramadan, spawning protests and a heated debate over religious freedom.

Islam is the official religion of the Tunisian state and 99 percent of the population is officially Sunni Muslim. But contrary to many Arab states, Tunisia enjoys degrees of secularism and religious tolerance. There is no penalty for apostasy – leaving Islam.

On paper, the country appears to embrace religious diversity, but, in reality, preaching other faiths outside of Islam is forbidden. “Tunisians would somehow tolerate apostasy, but as soon as they start preaching other beliefs, they will get in trouble,” said Belil, an ex-Muslim atheist who spoke on condition of anonymity.

Other restrictions also apply to religious minorities here. Christians can’t ring their church bells or build new churches. These rules were established in the Modus Vivendi agreement between the Catholic Church and the Tunisian state in 1964, after Tunisia gained independence from France. The Catholic Church wrote the agreement when it was trying to exert influence in a country that had widely rejected European colonialism and its dominant faith – Christianity.

And secular laws established during the French colonisation of the country are largely losing appeal, particularly in rural areas, where Islamists have gained a foothold. “The constitution in Tunisia says Islamic Sharia is the source of legislation,” said Fadhel Achour, secretary-general of the Union of Imams.

The new constitution was written in 2014. The first article makes it clear where it stands on religion and the state: “The state is the guardian of religion.” Secularism in Tunisia is impossible, said Achour, because Tunisia is historically “a Muslim nation”.

The incorporation of Sharia into state laws is limiting women’s marital choices, raising questions on the compatibility of Islam with freedom of religion. In the predominant interpretation of the faith, women are forbidden from marrying men of different religions, while men are free to marry Christian and Jewish women.

“The issue of non-Muslims marrying Tunisian women is a sin according to divine law, and not permitted under our civil law,” the imam said. Some Tunisian women have protested the law, asking for the freedom to marry men of their choosing – but the imam insists the law is needed: “Women are supposed to obey their husbands in accordance to religious law.” 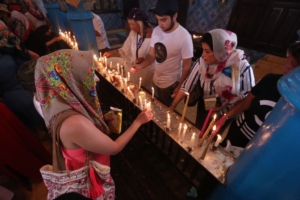 Jewish pilgrims from Tunisia and around the world observe their annual pilgrimage at El Ghriba Synagogue, the oldest Jewishmonument built in Africa, on the Mediterranean resort island of Djerba

Iqbal Gharbi is a psychology professor who specialises in religious studies at the University of Zitouna. She told The New Arab that the marital law derives from an Islamic interpretation of the Codes of Personal Status set under French rule, which stated that “two future spouses must not act as an impediment provided by the law”.

After independence, the term “impediment” was interpreted as Sharia-based.

Other problems stem from culture. Mohammed is an ex-Muslim who converted to Christianity. He details his religious transition, and says that while his Muslim family and friends have embraced his conversion, he struggled to reveal himself as Christian in wider society.

“The biggest fear when I became Christian was the fear of being rejected,” said Mohammed. He knows of converts who have been violently beaten – one had bones broken, and many others were kicked out of their homes. Another convert, a young woman, said: “I cannot tell my family because they would not respect my decision, they would think I converted to not wear a veil or to drink alcohol.

“The truth is that I converted to Christianity because I believe in the love of Jesus Christ.”

Tunisia’s culture widely rejects conversion, despite it being legally permitted.

While Islamism has widely increased in rural areas, cities enjoy more religious freedom. Belil feels lucky to live in the capital, Tunis, where he has a range of non-Muslim friends, but said that even here he “still feels the intolerance”. The seven-year sentences given to two men in 2012 for blasphemy after drawing cartoons of the Prophet Mohammed still make him feel uncomfortable.

Belil has, as a result, decided to take precautions by using a cover name on his social media accounts. A government official, who also spoke under condition of anonymity, said the rise in intolerance towards blasphemy was a direct result of the rise of Islamist groups in parliament since the revolution – referring in particular to the Ennahdha party, which won the first round of elections.

Belil took part in the 2011 revolution because of his frustration with the corruption of the previous regime. Mohammed, meanwhile, said the revolution initially resulted in an increase of individual freedom that allowed him to contemplate his conversion to Christianity.

However, when the Islamist group Ennahdha later rose to power, both were disappointed. Other more extremist groups such as Ansar al-Sharia and Hizb ut-Tahrir – previously forbidden – also gained ground in the wake of the revolution, empowering radicals in the country.

One senior figure at the Ministry of Education said the freedom bestowed by democracy was “exploited by radicals and Islamists for their own ends”. He too asked for anonymity, over fears his comments would compromise his profession. 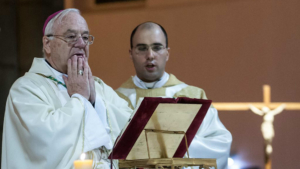 Ilario Antoniazzi, archbishop of the Roman Catholic archdiocese of Tunis, leads a mass on Christmas Eve

Christian religious leaders abide by the country’s laws and way of life. “We believe in leading by example: Love, respect and compassion,” said Père Jawad Alamat, the secretary-general of the Catholic Church in Tunisia. He said the Catholic Church runs nine private schools with approximately 6,000 Muslim children. But Catholic schools need to follow state programmes with Islamic teachings.

“This is our culture, and it needs to be respected,” another government official explained.

An Anglican Church official, at the only Protestant church in the city of Tunis, added: “Freedom of religion is enshrined in the constitution, including the right to change religion, but we are not allowed to proselytise.”

What about when Muslims inquire about Christianity? “If people come to us, then we tell them the message of the gospel, and then they make their own decisions.” During church ceremonies, the local police provide security due to the state of emergency declared following the Bardo and Sousse terrorist attacks in 2015.

The same restrictions don’t apply to Jewish people living in the country. Jewish communities face threats from citizens who associate them with Israel, but they’re afforded relative freedom. They are also guaranteed absolute protection by the Tunisian government. Synagogues and Jewish schools are surrounded by military police.

Batou Attab is the chief rabbi in Tunis and head of the Jewish school in Rue de la Palestine. “Life for Jews in Tunisia is good, and I see a bright future,” he told The New Arab. The rabbi lost his son, Yoav Hattab, in the Islamist terror attacks on a kosher supermarket in Paris in January 2015. Despite this tragedy, the chief rabbi holds strong relationships with Muslims.

“Jews and Muslims have co-existed for more than a thousand years peacefully,” he argued. He has Muslims teach non-religious subjects in his school. When asked about tensions between Jews and Muslims over the Israeli-Palestinian conflict, he said he wasn’t interested in discussing Israel because his loyalties lie with Tunisia: “Tunisia is my mother.”

The question of Jews and Christians being treated differently in the country is a complicated one; Jewish people are allowed to attend their own religious schools, while Christians cannot – but Jewish people also face higher security threats in relation to their perceived relationship with Israel.

A government official said Jews had more religious freedom because of their historic presence in the country, while Christians have had a less significant and stable influence. But since Tunisia’s independence, many Jews have left Tunisia and moved to Israel.

The rabbi and the government official both argue Tunisia is a unique country in the region, as it refuses to have foreign interference dictate its future. “Tunisians are intellectual people,” the rabbi said. “They wouldn’t let that happen.”

While citizens like Mohammed and Belil disagree on the freedoms afforded to atheists and Christians, they acknowledge they are lucky compared with their fellows elsewhere in the region.

Manufacturing virginity: The Tunisian women choosing to ‘repair their...