This article was first published on First Things, March 22, 2018.

Identity, tradition, and religion have new prominence in Italy after the recent election. The Northern League, once a marginal party that called for the independence of the northern Padania region, became mainstream by appealing to national and religious sentiments under its new leader, Matteo Salvini. (“Northern” has been removed from the party’s name to appeal to southern voters—it is now just “the League,” or “Lega.”) During a rally in the month before the election, Salvini swore on the Gospel and the Italian constitution that he would be “loyal to his people,” holding a rosary in front of thousands of ecstatic supporters.

Alessandro Morelli, a newly elected member of parliament for the League and one of Matteo Salvini’s pupils, keeps five copies of the Gospel in Milanese on his office bookshelves. He grew up in Catholic schools and says he feels strongly about his faith and the role it should play in Italy. “We are a religious country, even if a secular one.” A poster of the Madonnina statue in Milan’s Duomo hangs on his wall. 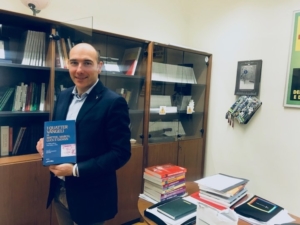 Alessandro Morelli in his office holding the Milanese Gospel.

Morelli feels optimistic about the future, though he is unsure about collaborating with the populist Five Star Movement, which won more than 30 percent of the vote, mostly in impoverished southern regions where the League still has a bad name for its previous calls for separation. “We’re very different from each other,” Morelli says.

There are disagreements between the Catholic hierarchy and the populists who are trying to reclaim the Christian identity they see as being under threat. The archbishop of Milan, Mario Delpini, criticized Salvini’s use of the Gospel and the rosary at his rally. “Rallies should be about politics,” he argued.

“I never expected that we would have so many difficulties with the Italian Church,” said Morelli. He tried repeatedly to book an appointment with the archbishop of Milan, to no avail. “They keep telling me they’re busy,” he said. “I don’t understand. There is general hostility from the Catholic Church towards us, but they support the morally relativist and Islamist-friendly Partito Democratico.”

The key issue is immigration. Whereas Pope Benedict talked about “the right not to emigrate”—the right of would-be emigrants to find livable conditions in their home countries—Pope Francis now talks about Western countries’ “duty to accept” migrants. In 2016, Salvini held up a shirt that read: “My Pope is Benedict.” In a speech in 2016, he reiterated Benedict’s words: “I remember what he said about immigration—that before having the right to emigrate, there should be a right not to emigrate.”

Pope Francis’s words are increasingly alienating to Europeans who are becoming skeptical about their duty to accept anyone and everyone who reaches their shores. But the Church has doubled down on its position. After the election result showed a win for populist parties, Pope Francis expressed his concern: “The world today is often inhabited by fear. It is an ancient disease. … And fear often turns against people who are foreign, different, poor, as if they were enemies.”

“Salvini should be reading the Gospel, learning about how it teaches us to help the poorest and most vulnerable people in our society, instead of flaunting it during his rallies,” said a priest in Milan who asked to remain anonymous. Whereas Salvini uses the slogan “Italians first,” recalling Donald Trump’s slogan “America first,” the priest says he believes that “all Christians are our brethren.”

Even on moral issues, there is tension between the Catholic Church and the League. “Our Church goes to Africa to preach against the use of contraceptives, but doesn’t oppose abortion in Italy,” said Morelli. He said he was “shocked” to see Pope Francis photographed with Emma Bonino, the leader of the liberal +Europa party. Bonino was known in the 1970s for her pro-abortion activism, and she was once pictured performing an abortion with a bicycle pump. Morelli decries the fact that “we live in a society where the life of the worst criminal is worth more than that of an unborn child.”

However, there is one issue on which the Catholic Church and populist Italian politicians can agree: the moral decay pervading Western society. Italy is more religious than northern Europe and has been influenced less by the values of the Enlightenment and postmodernism. A poll by Eurobaromater shows that only 6 percent of Italians describe themselves as “atheist or agnostic.” The crucifix remains on the walls of state schools and courtrooms. “We say: Don’t take the crucifix away from our classrooms and courtrooms, because the crucifix is the symbol of our culture,” Morelli said.

Francesco Menghi, an avid Five Star supporter from Milan, agrees. He supported the Movement because it promised to tackle “corruption, poverty and unemployment.” But on controversial topics like religious identity, the Five Star Movement holds ambiguous positions. “They’re about national sovereignty, but they’re also quite liberal, leaning on a form of left-libertarianism,” said Menghi.

Morelli is totally opposed to the libertarian ethic. “The ’68er revolution has destroyed our values,” he says, echoing a sentiment expressed by traditionalists across the West. The League’s historic victory is another sign of a global rebellion against the spirit of ’68. What might take its place remains to be seen.