This article was first published on Jacobite magazine, March 22, 2018.

The League won a historic 18 percent of the vote in Italy’s general election at the beginning of March, 2018. Many foreign news outlets, from the BBC, to The New York Times and Reuters, have classified the League as “far-right.” The ambiguity surrounding this term has made it hard to examine what this party is really about. “Far-right” has been used to describe American neo-Nazis, European populists, and even the conservative Freedom Caucus in the U.S. House of Representatives. In the case of the League, the term has painted the party with the brush used for other European populists. But the truth about the League, a party with secessionist origins, is a little bit different.

The League was formerly named Lega Nord, or “Northern League” in English. It originated as a separatist party seeking independence for the “Padania” region, which comprises mostly Lombardy and Veneto, where the League has the strongest support, but can also include Piedmont, Liguria and Emilia Romagna. (Though often used to describe Northern Italy, it doesn’t include the regions of Valle d’Aosta and Trentino-South Tyrol, which already enjoy significant autonomy.) It was born out of a movement of workers who sought to defend the appropriation of their resources by the central government in Rome, which were being redistributed to the more impoverished southern regions of the country. The party wanted more independence, and to free itself from the shackles of their Roman masters.

In this sense, the League has anti-fascist origins – Umberto Bossi, its former leader, characterized himself that way. The party not only sought to split Italy, but also decentralize power to its regions, both of which are concepts antithetical to the ideas of unity and state centralization native to fascism. The League even contained communist leaders. Matteo Salvini in 1998, at the beginning of his political career, used to be the head of the Padanian Communists. Today, he’s described as a “far-right” leader.

“We still have secessionists in our party,” Roberto Colombo, a League activist who works for Radio Padania, told Jacobite. Despite this persistent separatist sentiment, Colombo explained how the party has morphed into a more national one. “We’re collectively under attack now, so our priorities have changed.”

Alessandro Morelli, who was recently elected for Parliament on the League ticket, explained how the party shifted its antagonism from Rome to Brussels. “The League has grown in the south as well. But the most incredible vote was in the center of Italy, where we really made tremendous progress. Now I’m convinced that we will reach the south, too,” Morelli said in an interview.

In his office, though, Morelli still hangs a poster that reads: “Milan, the capital of responsibility. Rome, the capital of welfare and public debt.” He said that it’s an old poster, but the it’s a concrete instance of how the party’s secessionist platform still remains embedded in Italians’ memory. As a result, the League still has an unfavorable reputation among many southerners, despite its best efforts to win their votes. Today, the League favors national unity, but decentralization of power to Italy’s regions. “I would like for the money which is produced in Lombardy to remain in Lombardy,” said a supporter of the League who asked to remain anonymous. “That’s not because I dislike the south – I think it’s in their interests too not to be dependent on us.” 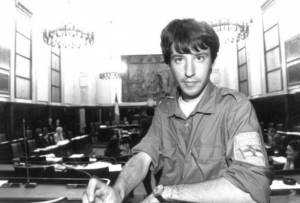 Matteo Salvini in 1998 for the “Communists of Padania”

Under Umberto Bossi, the party’s former leader, the League had tried to create a southern chapter, but to little avail. In contrast, Matteo Salvini decided to remove “Northern” from the party name, despite sharp criticism from the party’s old guard. In doing so, he managed to appeal to southerners with unprecedented success, though still lacking widespread support. The south of Italy largely voted for the Five Star Movement, mostly because it promised to tackle corruption and unemployment endemic in those regions. Some mainstream Italian newspapers, like Il Corriere and La Repubblica, have speculated this was because the Five Star had offered a universal basic income, fitting into the Northern League’s earlier prejudice of southerners “needing assistance.” Despite this, the League remains adamant on appealing to the south. “We want to win over the south as well,” said Morelli.

Today the League has different priorities. It’s the most Eurosceptic party currently holding seats in the Italian Parliament and views the distant tyranny of Brussels as a greater emergency than anything coming from Rome. The immigration debate has been at the center of the party’s anti-EU position. President of Lombardy Attilio Fontana made a controversial remark during the campaign, stating that “the white race” was under attack from African migration. Though he later apologized, Salvini didn’t explicitly condemn the remark. The League is often described as “ethno-nationalist,” but the reality is far more complicated. It elected the first black senator in Italian history, Toni Iwobi: a Nigerian man that came to Italy legally – as he likes to underline – and decided to join the party around twenty years ago. In a speech, he holds a shirt that reads: “We’re not racist, but realist,” and talks about the dangers of the “invasion” of African migrants to Italy. 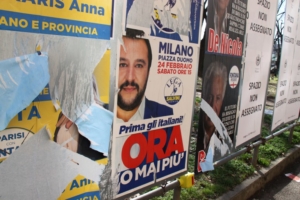 Religion is also playing an unprecedented role in the League’s ideals. Matteo Salvini held a Bible and the Italian constitution swearing allegiance to his people in a rally just before the election. Contrasting the “Islamization” of Europe has become a key priority. “I don’t want a religion which says that women should have less rights than men,” Salvini said at the European Parliament a day before the election. “In Milan, we only have one official Mosque because the League has always been opposed to their construction,” Morelli said.

The party also changed its focus on centralization from Rome to Brussels in economic matters. “The euro is a Franco-German monetary system” designed at the expense of southern Europe, said Telesforo Boldrini, a writer for  Italian outlet Scenari Economici and a League supporter, Telesforo Boldrini. He said the Franco-German and American alliance has brought vapid consumerism through the veneration of the “individual” over the “community.” He also added that “with the tariff war that has occurred between Germany and the United States, Italy will have to pick a side between the globalist or national view, and I hope Italy will take the national side with the United States under Trump.” Morelli added, however, that: “We’re not nationalist – we’re in favor of defending national interests, but that is different from nationalism. Nationalism has brought about two world wars.”

Despite now being characterized as “far-right”, Morelli believes that the left-right axis has lost its usefulness. “Left and right don’t exist anymore; and the center-left and center-right have died,” he said. “We’re witnessing an epic shift in our times; what has governed this world for the past thirty years – the model which said that globalization was the cure to all our ills – is dying.”

A red Venetian flag of the “Lion of Venice” on one side and the Padania green flag of the “Sun of the Alps” on the other in Piazza del Duomo, Milan, in front of the statue of King Vittorio Emanuele II, who unified the country in 1861

Through its focus on defending regional autonomy, the League is now the major Italian party defending the country against the dangers of globalization. Despite being often defined as “far-right,” the League differs from other European populist parties who favor a more extreme form of state-centralized nationalism. Salvini managed to morph the movement into a more national one, but sentiments of regional pride and identity still remain strong. This is no longer incompatible with national unity as it was during the party’s quest for separation – indeed, regional identities may be inherent to the identity of the nation as a whole.