Christians in Hong Kong, under the Thumb of the Chinese Communist Party

This article was published on National Review – July 13, 2020 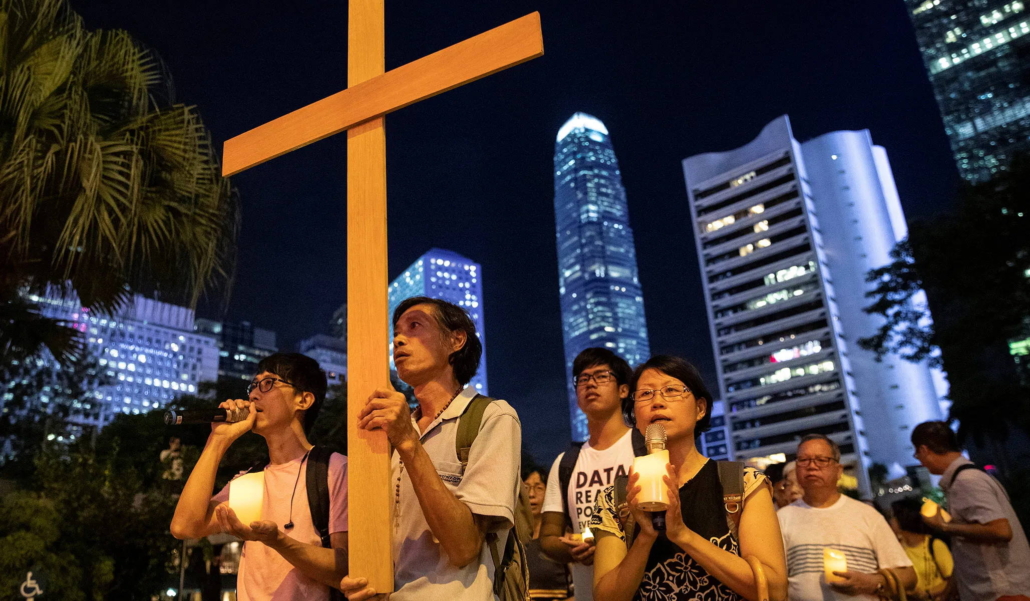 The restrictions under which they may practice their faith increasingly resemble those of their coreligionists living in the mainland.

Hong Kong’s Christians fear reprisals from China’s Communist Party. A national-security law was passed on June 30 by China’s Standing Committee, superseding Hong Kong’s legislature. For China’s Communist Party, this measure was necessary to guarantee stability after more than a year of protests in Hong Kong. The new law ends the region’s autonomy and the hope that the demands of pro-democracy protesters will be met any time soon. Christians who participated in the demonstrations now believe that they will be targeted if they don’t toe the party line.

In mainland China, Christians who defy the Chinese government’s attempts at control of their churches reportedly face persecution, arrest, and detention. Underground churches are destroyed and crosses burned. Translations of the Bible must be approved by China’s Communist Party and often modified to meet its demands. In Hong Kong, however, Christians enjoyed religious freedom guaranteed by the region’s legal independence, which provided its citizens basic rights including freedom of expression and religion. Christians, more than 10 percent of Hong Kong’s population, held peaceful rallies during the protests by singing hymns to affirm their faith. Thousands took to the streets, and many Protestants and Catholics united to defend a common cause with pro-democracy protesters.

The national-security law in Hong Kong now prohibits secession, sedition, terrorism, and collusion with foreign forces. Those terms are so broadly defined that they can be used arbitrarily to prohibit any form of dissent. What worries religious minorities, and Catholics and other Christians in particular, are the law’s collusion and subversion and clauses.

The sedition clause effectively prohibits Christians from criticizing the Chinese government. Before the national-security measure was passed, many Christians in Hong Kong had spoken out against injustices in mainland China. “Now, many refrain from voicing any concerns toward issues that can be defined as ‘state secrets,’” a Catholic lawyer who works in a financial-regulatory body told me. Like others quoted in his article, she asked for anonymity, for fear of reprisals.

The collusion clause forbids Christians from seeking support from abroad, including the Holy See. With the pope in Rome, the Catholic Church is, by Beijing’s definition, a foreign institution. “This measure can easily be used to target and penalize churches, especially the Catholic diocese which receives instructions and directions from the Vatican,” another Catholic lawyer in Hong Kong told me. “The churches can be ordered to disband and their assets can be confiscated if they breach the law.”

Violation of one of these laws carries a maximum sentence of life imprisonment. The main issue is that Hong Kong is powerless against such rulings. There is no guarantee that those charged or suspected under the law will not be extradited to mainland China. But under the law, proceedings will be tried without a jury in Hong Kong. So instead of the extradition law proposed in 2019, the national-security law might simply bring China’s rule to Hong Kong. Inspired by the British common-law system, Hong Kong’s Basic Law guaranteed freedom of expression and religion, but the national-security law overrides those rights.

The fear of reprisal has already had an effect. Religious leaders who had previously supported the Hong Kong protests have now expressed approval for the national-security law. The main religious denominations in Hong Kong were summoned to a meeting at the Liaison Office in June, before the implementation of the law, and expressed support for the measure afterward. “It appears that they are closely monitored by the government,” one of the Catholic lawyers I spoke with told me.

Cardinal Tong, the apostolic administrator of Hong Kong, had pleaded for the Hong Kong government to “listen to the voices of the people” during the protests in 2019. After attending the meeting in June, however, he sounded a different note and claimed that the new national-security law “doesn’t threaten religious freedom.”

Only a few Christian leaders have continued to support the pro-democracy movement. Cardinal Joseph Zen, former bishop of Hong Kong, has spoken out against the law. A longtime critic of China’s Communist regime for its violations of human rights, he has said that he is prepared to face arrest under Hong Kong’s national-security law. Some Christian pastors also bravely spoke against the law, like the chairman of the Baptist Convention of Hong Kong. He reportedly was forced to withdraw his statements to protect his church. Other Christian leaders decided to express their concern in a safer way: Auxiliary Bishop Joseph Ha, who had previously supported the pro-democracy movement, abstained from criticizing the new law in public. Instead, he urged his followers to carry crosses on the street.

Many Catholics in Hong Kong worry that the Vatican is being influenced by the Chinese Communist Party. In 2018, Pope Francis reached an agreement with the Chinese government to appoint bishops in mainland China. The agreement expires in September, and the stakes are high for the Vatican to continue its limited role in upholding the Catholic faith with China’s Communist Party. As a result, the pope avoided mentioning his concerns over religious freedom in Hong Kong by reportedly going off script in a planned statement.

Hong Kong’s Chief Executive Carrie Lam, a Catholic, was selected with the expectation that she would secure the region’s autonomy, but she has steadfastly supported Beijing in quelling the protests and forbidding dissent. Many Catholics in Hong Kong are heavily disappointed by her leadership. “I do not see her as a Catholic anymore,” a Catholic lawyer in Hong Kong said. “She will have to answer for her actions when Judgment Day comes.”

With the Sino–British Declaration of 1997, Hong Kong was granted legal independence and the promise that it could maintain fundamental freedoms while being handed over to China under a “one country, two systems” agreement. The Chinese Communist Party has attempted to exert control over the region’s autonomy ever since. With the new national security law, China’s regime has now won a major battle. The restrictions under which Hong Kong’s Christians may practice their faith increasingly resemble those of their coreligionists living in mainland China.

The Rise Of Right Wing Feminism In France